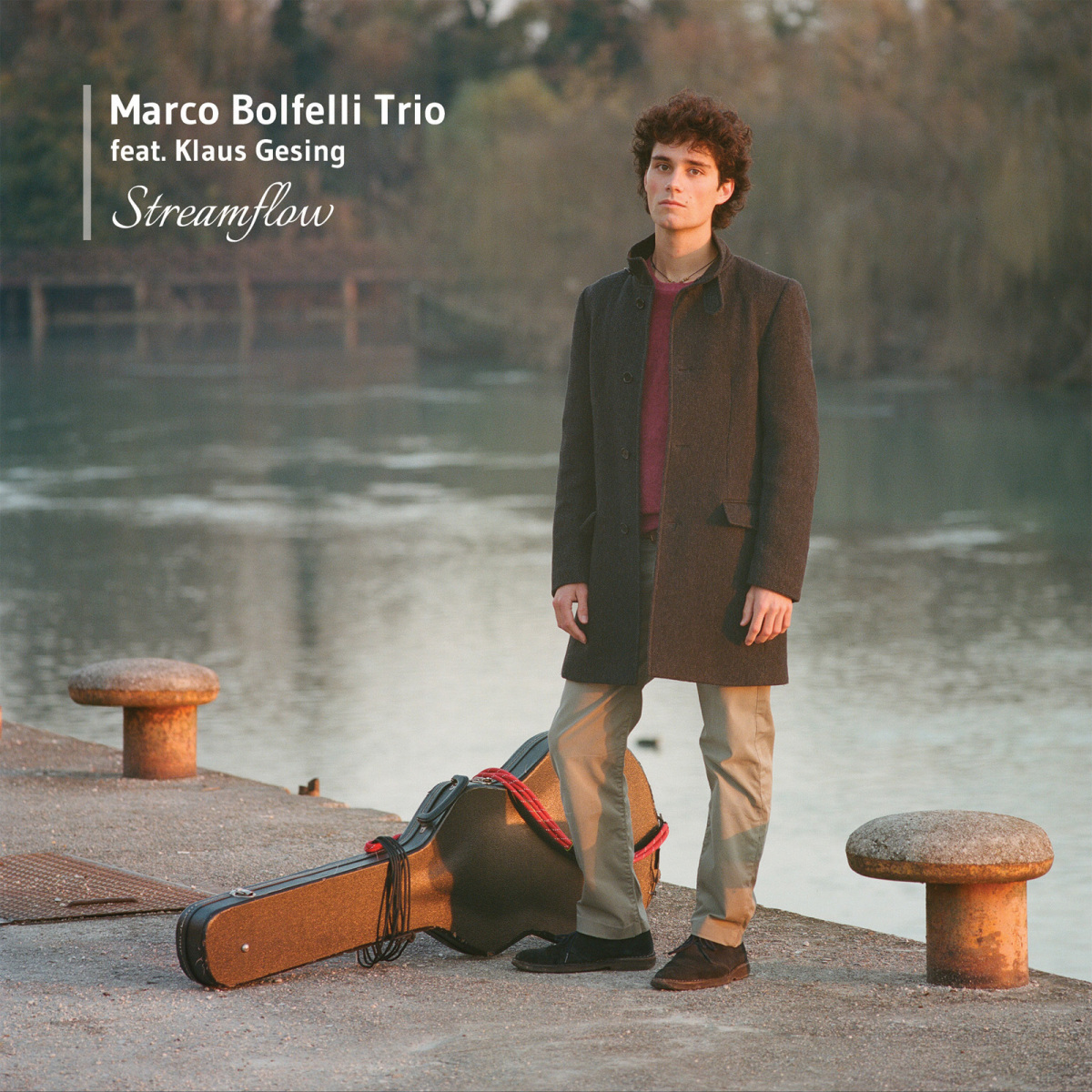 Credits: Recorded, mixed and mastered by Francesco Marzona at Birdland Studio All compositions by Marco Bolfelli except Finisterre by Klaus Gesing.
/

Streamflow is a very strong debut recording from guitaristMarco Bolfelli and his almost telepathic trio partners Simone Serafini on bass and Igor Checchini on drums. ReedmanKlaus Gesing (bass clarinet and soprano sax), one of Bolfelli’s mentors, appears on four of the eleven tracks.

Bolfelli gets composer credits as well for all tracks except “Finisterre,” which is an wonderful overdubbed improvisation by Gesing. His music has soft edges even when his guitar sound enters the overdriven zone. The harmonies he chooses are lush and his melodic lines tend to spin out and spill over the bar lines with odd length phrases.

Very facile technically, Bolfelli can concentrate on building a solo, and uses space very intelligently, which helps the ear follow the melodic flow.

While all of the tracks are attractive in one way or another, Gesing’s presence and energy on “Nekar” and “Atlantica” makes these tracks standouts. The former begins with mysterious ambiance surrounding the theme, and then evolving into a hot section with strong interplay and give-and-take between guitar and reed. The latter also begins softly, with solo guitar, but then moves into a driving section featuring some amazing unison playing of Gesing and Bolfelli.

Streamflow is a very rewarding listening experience as Bolfelli demonstrates a wide emotional range combined with the musical instincts of a mature musician.

The scintillating “Madiba” (Nelson Mandela’s Xhosa clan name) opens up this set with a cascade of fluidly chiming harmonics. Developing at a moderate pace, it’s a haunting celebration of a uniquely inspiring leader. “70pic” signals that the nearest equivalent to Bolfelli’s playing might be that produced by virtuosoBill Frisell, both chordally and melodically with characteristic interrogatively bending notes that so nearly describe the glissando of a pedal steel guitar. On “Nekar” the trio is joined by guest Klaus Gesing on bass clarinet, adding a new dimension and providing contrasting tonal depth particularly when Gesing plumbs the lower register of his instrument and shares an exciting improvisational interlude with Bolfelli.

As its title implies, “Take The C-Train” is a paen to Duke Ellington with Bolfelli reworking the main theme of this most famous Billy Strayhorn number before moving tangentially to an extended extemporisation by Bolfelli and Klaus Gesing on soprano saxophone. “Back To The Garden” is a quiet ballad affording Bolfelli a good opportunity to stretch out his soloing skills, whereas the final fascinating track “Taiga,” evokes at times the sound of the Japanese shamisen, but here played on a guitar.

The debut album by this young Italian guitarist and Berklee College student is a hugely impressive and satisfying affair and judging by Streamflow, Bolfelli undoubtedly will ascend to even greater things in the future.