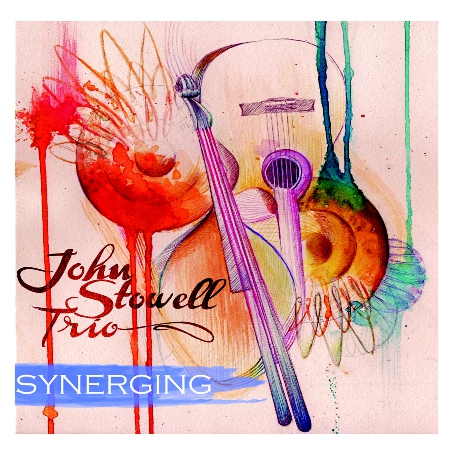 A matter of feeling. Artistic, mental, emotional and especially human feeling. This is the
best way to describe the creation of this extraordinary formation.
Not a new story, maybe, but in this case stemming from the instinctive and unconditional
trust between John Stowell and Igor Checchini.
The collaboration began four years ago, thanks to a workshop that Igor organized during
Stowell’s stay in Italy; it was the perfect way for them to meet and start putting together
their ideas and perceptions. Since then, following some concerts and the definitive
addition of Seggi, the project began taking shape, sound and color.
“Synerging” is a choral work, where the three artists’ musical thoughts have layered and
blended in a light, delicate way. An important part was the arrangement of Stowell’s pieces
by Checchini and Seggi, which guaranteed rhythm and tone solutions coherent with the
American guitarist’s typical sound. The three musicians’ great open mindedness and
artistic sensitivity also allowed soft mutual influences, with no limitations to their freedom
of expression nor to their personal space for interpretation.
In “Neptune Ghost” the trio’s nature takes shape, it is defined; a piece where the artists
dare a little more, both in their execution and in the mixing and editing stage in the studio:
“The fact of putting together classic guitar, electronic effects and very compressed drums
generated a piece that personally I would have never imagined for and with John,” Igor
Checchini admits, “the idea has been growing for some time, reaching an extreme result
which was happily shared by everybody. A very important role was played by Gianluca
Zanin, who was responsible for all the recording, mixing and mastering part.”
Thus, the need of “going beyond” and explore new sound territories that hadn’t been
experimented yet were the two main reasons behind this piercing and surprising work.
Furthermore, it is also characterized by sharp blues passages, pieces dedicated to the early
jazz and inevitable tributes to some of the greatest contemporary artists, as in the version
of “All I Want” by Joni Mitchell (the only piece sung by Francesca Viaro’s beautiful voice).
“Synerging” is a sweet, stimulating and fun album, in addition to being one more testimony
of the musical and emotional enthusiasm of a musician of great experience on an
international level – John Stowell – .