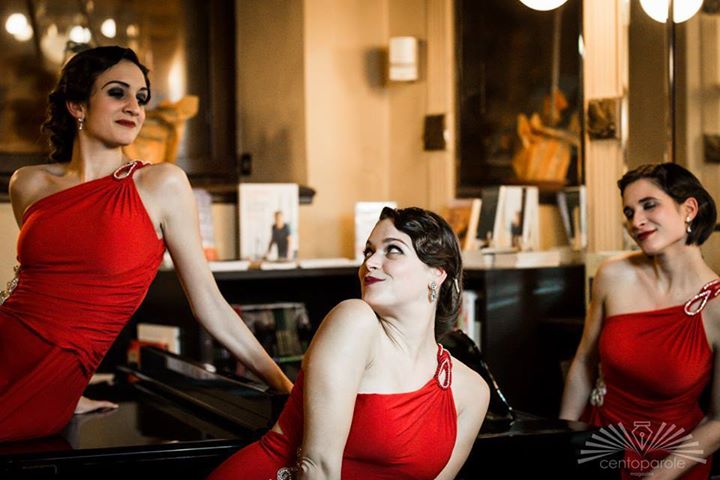 Les Babettes is a female swing vocal trio formed in 2011 in Trieste. Les Babettes’ show has a vintage flavor and captivates the audience with the elegance and wit of the arrangements, choreographies and costumes.

Since 2013, Les Babettes have performed in concerts, festivals and events in theaters, clubs and open-air stages across Italy, Slovenia, Switzerland and Spain. They have collaborated with several TV channels (German and French Arté, Italian Sky Arte, Rai 3, Sky, Cielo) as well as with numerous Italian radio stations (Radio Deejay, Radio 105, Radio Rai FVG, Radio PuntoZero). They have performed at Italian radio awards “Cuffie d’Oro” (EXPO, Milano) and at the gala concert “Voce Artistica 2015” (Ravenna). They have played at the Trieste Loves Jazz festival (Trieste), Bastianich Music Festival (Cividale), Friuli Doc (Udine), Sexto Vintage (Festival Rockabilly, Pordenone) and Swing Fest (Madrid, Spain). The trio has also joined Joe Bastianich (entrepreneur and judge for Masterchef Italia and USA) in his musical project and performed together at Umbria Jazz, in different venues all over Italy and on national radio stations. Les Babettes’ TV credits include “On the Road”, hosted by Joe Bastianich, broadcasted on Sky Arte, and “Metropolis”, the international artistic and cultural program transmitted on the European TV station Arté. In 2014, Les Babettes obtained the “Enel Green Light” at the final auditions for the Italian X Factor season 8 (Sky1 HD and Cielo) which got them through to the live show thanks to the public’s vote.